Tourism Nova Scotia gathers and reports tourism statistics on behalf of the tourism industry. These statistics help inform our decision-making process, help describe visitors to Nova Scotia, and can be used by tourism businesses and organizations for planning and business development.

Accommodations operators across the province report 1,197,000 room nights sold year to date as of November 2020, down 54% compared with the same period in 2019.

All regions of the province have seen declines in room nights sold as a result of COVID-19. Year to date November, Halifax and Cape Breton have experienced the largest year to date percentage declines of 58% and 55% respectively. The smallest year to date declines are in the regions of Eastern Shore (down 38%) and Yarmouth & Acadian Shores* (down 31%).

Nova Scotia’s fixed roof accommodation providers continue to suffer the effects of the pandemic, with the number of room nights sold in the month of November down 42% (a difference of 74,000 room nights sold compared with November 2019). However, the November losses reinforce a trend of steady improvement, with the size of the monthly declines narrowing consistently since May, when monthly room nights sold were down 77% compared to the same month in 2019.

Looking specifically at the month of November, the greatest declines in room nights sold were in the region of Halifax, down 55% over the same month the previous year, and in the Bay of Fundy and Annapolis Valley region, down 30%. There was a notable contrast in November between the Halifax region (down by 55%) and the rest of the province outside Halifax (down 17%).

This difference is partly a result of recent activity in the Yarmouth and Acadian Shores region, where room night sales were up 66% compared to November 2019, an increase of 2,600 room nights. As in October, some of the large accommodation providers in the region attribute the activity to major construction projects pushing demand for overnight accommodations.

*The year to date November 2020 decline of 31% in room nights sold in the Yarmouth and Acadian Shores region follows a decline of 21% YTD November 2019, reflecting the ferry not operating in 2019. 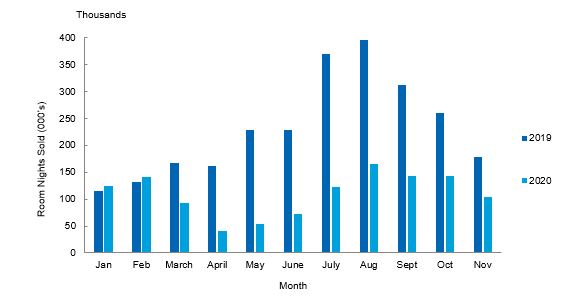 Notably, the percentage decline in campground site nights sold was less pronounced than that of room nights sold. Between June and October, site night losses ranged between -17% and -40% on a monthly basis, while room night losses ranged between -45% and -74% over the same period. This suggests that while the pandemic depressed sales for both accommodation types, it was less severe for campgrounds, which likely saw greater benefit from Nova Scotians and perhaps other Atlantic residents travelling within the Atlantic bubble.

According to AirDNA data, between January and December 2020, there were 327,000 room nights booked through sharing economy platforms, down 33% compared to the same period in 2019.

Room nights booked through sharing economy platforms were down by 32% in the month of December, compared with the same month the previous year. 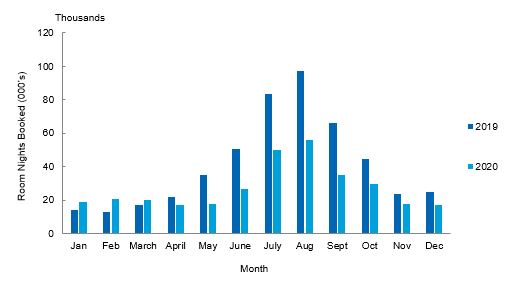 While passenger enplanements are not representative of visitation to Nova Scotia, they reflect passenger traffic (both Nova Scotians and non-resident visitors) at the Halifax airport, which is a good indicator of how travel to Nova Scotia is being affected by the pandemic. 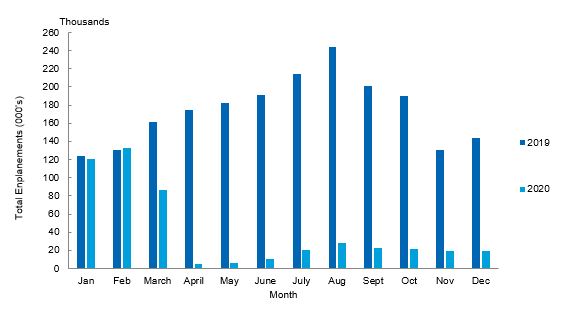 Tourism statistics are compiled from a variety of sources, including: